Our policy of non extermination at Nabana Lodge leads to many surprises of nature's many creatures and creepy crawleys. See what we found at Nabana Lodge!

Unusually large, with the markings and imitations of a snake, the Death's Head Hawkmoth caterpillar found in our gardens at Nabana Lodge early in June explains its history of spooking even the bold. This brute of about 14 cm long and as thick as my thumb thrashed around, audibly clicking its mandibles whilst trying to bite! The long horn at its rear adds to its dramatic appearance.

The striking skull-like pattern on the thorax of the Death’s Head Hawkmoth creates a sinister appearance and has it featuring in art, books and movies and even on BBC news in 2003. It is mentioned in Bram Stoker’s Dracula and Thomas Harris’s book Silence of the Lambs, featuring in the subsequent movie. The genus name, Acherontia is derived from the mythical Greek river Acheron and the specie names atropos, lachesis and styx all relate to death in Greek mythology.

These voracious feeders cause extensive damage, feeding off the stems of young shoots. I have not noticed large patches of decimated plants yet and hope the thrushes and Heuglin’s robin in our gardens will be brave enough to take on this substantial, tasty morsel, keeping a plague in check!

Credit to Wikipedia for image of moth. 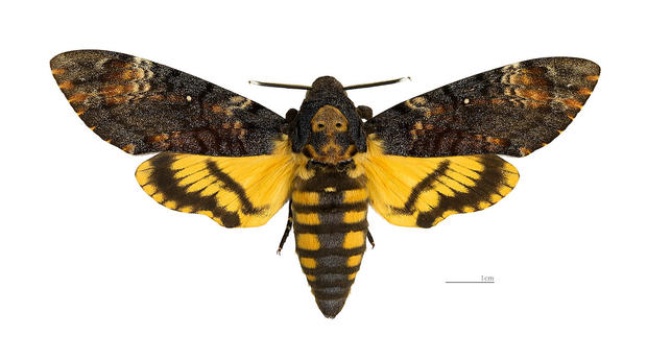 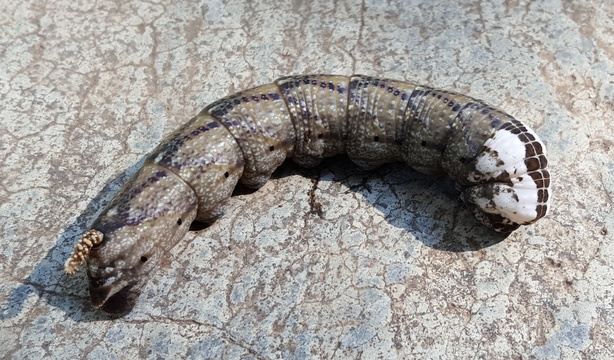