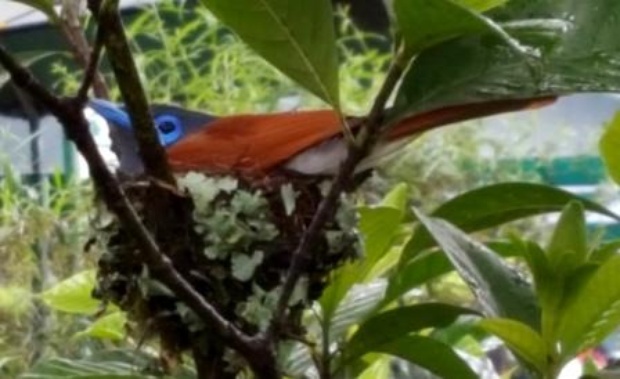 My grandson, breathless with wonder, arrived at my office here at Nabana Lodge with three minute little eggs in his grubby hand. “Ouma, look what I found for you!” And when ouma looked, one little egg was dented and cracked; the other two miraculously survived the enclosed fist. Hoping the paradise flycatcher will forgive the intrusion and not reject the eggs, we gently returned the two eggs to the little cup nest. Only just giving us a chance to move away, the little bird was back on the nest, warming its eggs. . 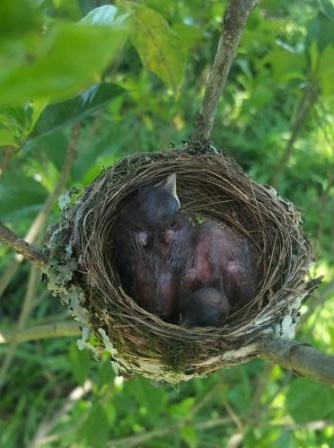 For the next week and a bit, he overwhelmed me with his dedication, resolutely sitting on the nest in pouring rain or constant drizzle, head raised to create a run off for the water, dragging his lovely long tail down with its weight. During the following days, the paradise flycatcher settled in calmly, allowing me to move in a bit closer to photograph him on the nest.

Dedication paid off handsomely when just over a week later two little beaks opened in unison as he sat in a nearby tree guarding the hatchlings, his alarm call sounding when perceiving dangers and swooping in every now and then to feed the chicks. 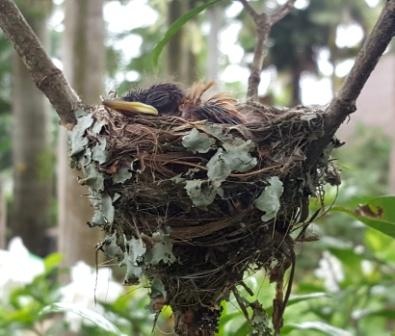 Although there was still a light drizzle, the poor weather had improved somewhat, and the two tykes were snugly warming each other in the nest. They grew quickly and within a week were seen to be sitting on the edge of the nest. 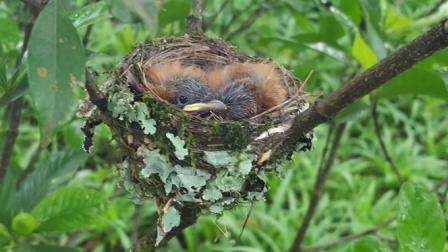 Then one morning, his constant alarm call alerted me to danger and upon checking on the chicks, found one hanging on for dear life to a twig above the nest whilst the sibling was nowhere to be seen. 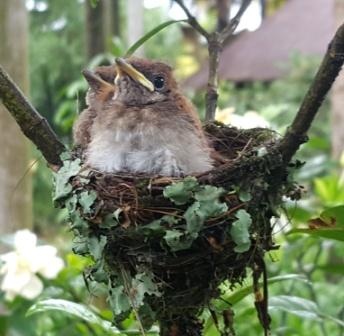 Assuming that the fledgling may have fallen out the nest upon exercising its wings, I scrutinised the undergrowth, looking for the floundering chick, almost stepping on the tail of a green mamba. The snake had found the nest – and what to do about the other chick? With a hammering heart all that could be done was to gently put him back in the nest, and hope for the best.

But the next morning, he too was gone ...leaving only the plaintive call of the paradise flycatcher and the empty nest as evidence. 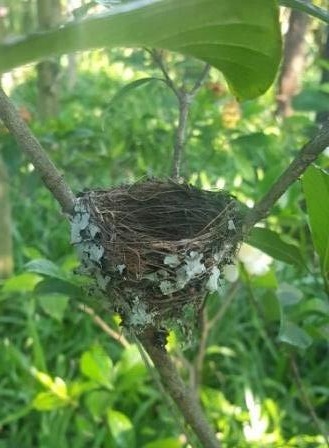 Surrounded by banana farms, Nabana Lodge is a haven for birds.