Taking road side corruption head on 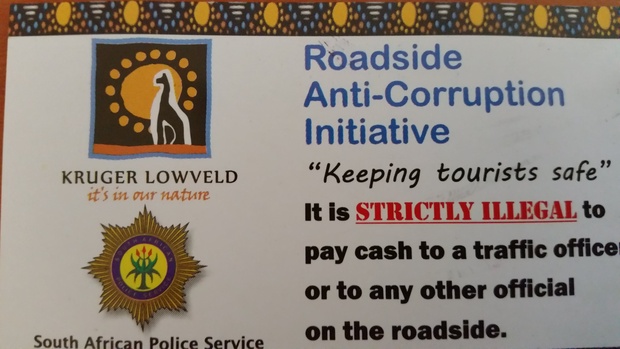 Roadside corruption from provincial and local traffic officials in the Mpumalanga Lowveld area, demanding cash for legitimate(or false) traffic transgressions, reared its ugly head in one of the most sought-after tourism regions in South Africa. The overseas tourist, often unsure of traffic regulations and payment of fines became the target. Let’s be honest – it is not the kind of thing you boast about – being caught for traffic violations, so by the time the extent of the corruption became known, it was firmly entrenched as a culture.

With the view that one incident is too many, Hazyview Chamber of Business and Tourism (HCBT) in partnership with Kruger Lowveld Tourism embarked on a campaign to stamp out the scourge. Hotels and lodges in the Kruger Lowveld region are provided with warning cards endorsed by the South Africa Police Services, advising tourists that it is strictly illegal to pay cash for a fine, and these cards are issued to guests. Should such a situation present itself, tourists present the card to the officials involved, collect the written fine document (often then retracted) and go on their way.

The campaign is now also supported by SAVRALA, the national vehicle rental forum and cards are issued to car rental companies to empower tourists from the moment their vehicle is collected. TRAC, the concessionaire on the N4 toll road are also distributing the warning cards at the toll plazas on the N4 national road from Johannesburg to the Lowveld and will furthermore be erecting warning signs on the roadside.

In view of the negative impact of roadside corruption on tourism, Mr Derek Hanekom, the Minister of Tourism, was informed of this practice at a public meeting in Hazyview and he has taken a strong stance in eradicating corruption of this nature. HCBT is compiling a corruption dossier from incidents reported by guests to hotels and lodges to present to Corruption Watch, and applying pressure on government offices to take action against the corrupt officials.

·         Fines can be paid at any police station, municipal traffic office or magistrate court

·         Collect your written receipt after payment