Nabana Lodge is an ideal location to fly a drone 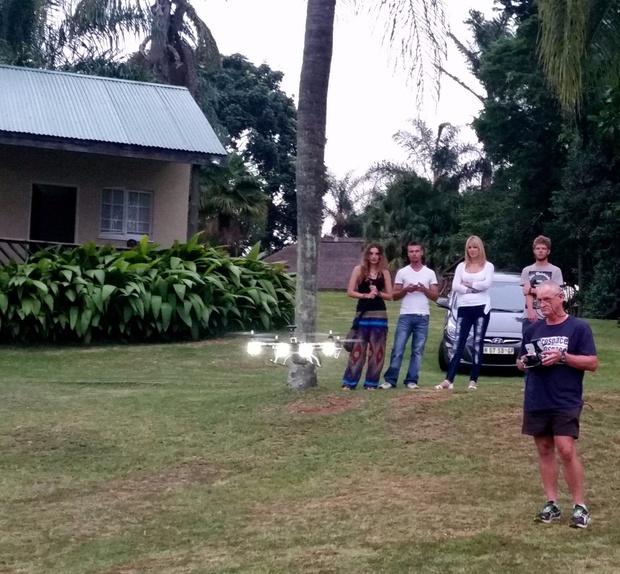 Local resident of Kiepersol, Chris Smit, living opposite Nabana Lodge near Hazyview, has been bitten by the Drone, aka Quad Copter bug. He acquired his first model in the beginning of 2014, but whilst teaching himself the rudimentary flight skills had to watch his drone disappear over the horizon, never to be seen again! Not to be deterred by this setback, Chris bought his second model and has since mastered the art of flying this amazing gadget. Thoroughly enjoying himself he delights guests at Nabana Lodge where he prefers to fly the drone, as the elevation and open area gives him ample visibility.

A very sophisticated piece of machinery, the domestic Quad Copter (local lingo for drone because of the four propellers) has a built in flight controller, compass and GPS, camera and hand held radio controller. The maximum flight speed of Chris’s APM 2.6 model is 80km per hour and the maximum permissible height is 100m and it may not be flown within 10km from an airport. Battery powered, the Quad Copter can fly up to eight minutes, where after it will return automatically, preventing it from crashing.

The GPS is the most important part as this sets the take off way points, without which the quad copter would simply keep on flying into the distance. Flight is most effective where at least 6 satellites can be picked up by the flight controller. Flight is either fully automated where the flight mode is determined by special software downloaded onto a laptop, or manually determined with a hand held  receiver. The software used in the automatic mode synchronises the GPS with the flight controller.

There are approximately twenty different flight modes are available of which Chris has mastered four:

v  Loiter mode, where the quad copter hangs in one spot at a set height

v  Altitude mode, where it keeps its height, but can drift

Quad Copters are fitted with lights for night flying as well as a built in camera, that apart from the recreational aspect, makes it ideal for surveillance. Purchased in kit form, the Quad Copter is assembled, with extra software available to be added as the level of operator’s skill improves, making it an ongoing and fulfilling hobby. Currently, Chris is the only Drone operator in Hazyview.